I’ve had a large 2000VA UPS here under my desk for some time, and it uses an external battery pack. The problem is, some time ago I lost the top half of the battery pack, so the batteries and the wiring was exposed.

I leaned a sheet of acrylic against it to prevent feet/dogs/falling objects from getting into the batteries, but I had always intended to construct some sort of real cover. I was fiddling around with the pack a couple days ago, and realized that if I could bend the sheet of acrylic I had stuck there temporarily, with two right angles, it could make a nice little cover.

A quick youtube search later, and I had a plan for bending the sheet. 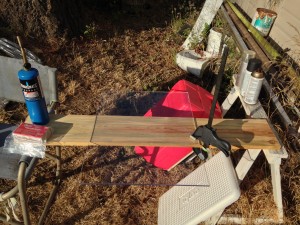 I used this board as both a support, as well as the form, as it was the same width as I wanted the top/middle section to be. 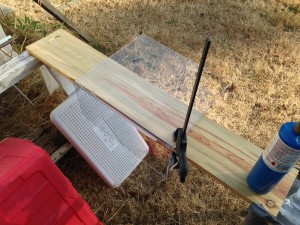 After gently heating along the bend to be made, I bent down one side of the acrylic at about a 90 degree angle. 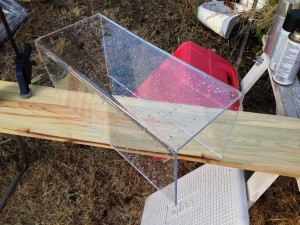 Then I bent the other side, and cooled the piece down with some water from the garden hose. 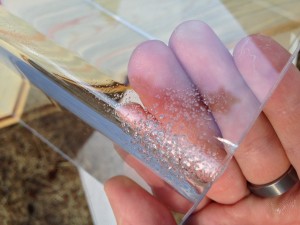 Unfortunately, the first bend I heated a bit too quickly, causing some sections to bubble and look less than pretty. 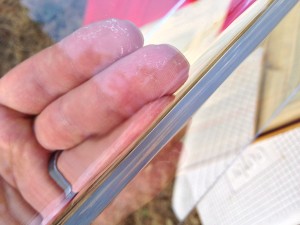 But I had much better success with the second section, by heating it more slowly, the bend didn’t bubble and came out clear. 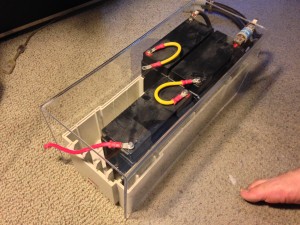 And finally, the cover is in place over the partially disassembled battery pack!

This entry was posted in Electronics, Life, Projects, Random. Bookmark the permalink.