With the recent interest in “Internet of Things” devices, most of the major cellular carriers have started offering very affordable plans targeted at this market.

I was interested in setting up a Raspberry Pi with some cellular connectivity for use in a number of potential projects. Some quick ideas might be:

I was looking around at various options for the modem itself, and happened upon a module set up for use with embedded systems from Adafruit (https://www.adafruit.com/product/3147) and decided to give it a try paired with a Raspberry Pi Zero W.

This module, which supports 3G and 2G networks, I decided to pair with AT&T’s IoT plans, one because AT&T has a 3G network whereas T-Mobile’s network is 2G, and because I couldn’t get T-Mobile’s sales staff to respond in a timely manner.

The setup is pretty straightforward, and Adafruit has put together a nice tutorial on how to hook up the module to the Raspberry Pi’s GPIO pins. https://learn.adafruit.com/fona-tethering-to-raspberry-pi-or-beaglebone-black/wiring?view=all

Note that their tutorial is based around their older modules that don’t support 3G connectivity, so they make some warnings about carrier selection, but if you chose the 3G capable module I listed above, the instructions are just the same. You’ll wire the module to the Pi’s serial GPIO pins, ground, and 3.3V power to set the voltage levels.

At this point, it’s just configuring the software as described in the tutorial. I’ll add a note of caution here, the serial device naming scheme on the Pis has changed in the Pi3 and PiZero families versus the older Pis. On the newer Pis, /dev/ttyAMA0 is not the hardware UART by default, and instead you should be using /dev/serial0. So in the PPP peers file you create, make sure to update it appropriately for the right serial device.

Add a little script to startup a reverse SSH tunnel to a device you control when the Pi boots up, and now you’ve got a device you can drop anywhere with cell service, and remotely manage it. 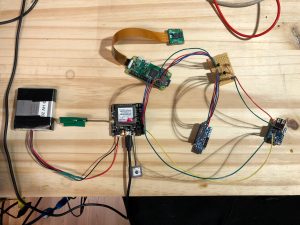 Here’s a quick shot of my setup in development. Bottom row from left to right is some batteries, the FONA cell module, a Arduino Pro Mini, and a small boost regulator to power the Pi. The top row is the Pi Zero W with attached camera, and a proto board to control power on/off to the Pi and handle voltage translation between the Pi and the Arduino Pro Mini.

The arduino controls power to the Pi, so we can shut down the pi and the cell module for a very low draw sleep, wake up occasionally to take a picture or perform some other task, then go back to sleep again. I plan to add some solar charging to the current setup, and it should be about done at that point.

This entry was posted in Electronics, Technology. Bookmark the permalink.