I recently purchased a new FT-60R dual band handheld from Yaesu, as the handheld I had already (a VX-150) was only a single band. Seeing as I do a fair amount of stuff up in the 70cm band, it would be useful to have a handheld that could do so as well.

After receiving my new handheld, it seemed like I wasn’t receiving as well as I felt like I aught to be. So, I decided to run a test, to see what the loss is, when going from the single band rubber duck antenna on my VX-150 to the dual band rubber duck on my new FT-60R. 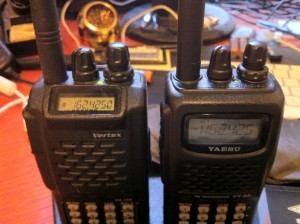 Now, one could say with just this test having been done that perhaps the VX-150 is just more sensitive, or the FT-60R is a little deaf in that frequency range. But we’ll swap the antennas to take the sensitivity (or not) of the radios out of the equation. 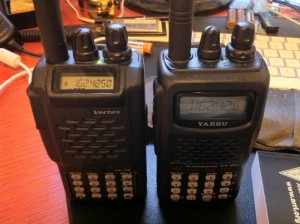 Now note that using the dual band antenna on the VX-150 results on only three bars, and the FT-60 now has six.

So, now we’ve come down to the truth of the matter, that the stock antenna that comes with the FT-60R is rather poor, even by rubber duck standards, when compared to the single band equivalent despite being physically longer. Since I don’t have a 70cm handheld and matching rubber duck, I can’t compare it there.

Which leads me to the conclusion that if I want to be able to receive very well, or get out at all, I should invest in a longer aftermarket dual band rubber duck antenna. Hopefully that will give me enough gain to at minimum match the performance of the single band antenna.

This entry was posted in Ham Radio. Bookmark the permalink.